The Dutch FA has released a plan to decrease violence against referees in Dutch football and get more respect for referees. 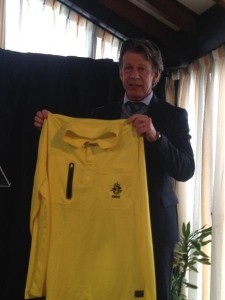 Arag and KNVB will give all Dutch referees a new official shirt.

Check out the full plan in Dutch (pdf). The death of linesman Richard Nieuwenhuizen was the main reason for this new plan, launched by the Dutch FA Wednesday 20th of March. “After that tragic incident in December 2012 one thing was absolutely clear: more needs to be done [against violence]”, says the FA in a statement which was delivered in the mailboxes of all Dutch referees.

Sponsor ARAG also announced that all Dutch referees will get an official Nike referee shirt.

According to the FA’s plans.

9 thoughts on “Dutch FA takes measures against violence against referees”