Maltese referee Esther Azzopardi had recently been promoted to Uefa’s Elite Development list. She got the love from refereeing from her father, a former Fifa assistant referee. “I always trust in his advice.”

An interview with Esther Azzopardi on the Dutch Referee Blog. 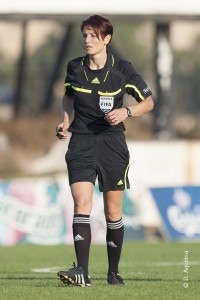 When and why did you start refereeing?

Azzopardi: “I wore the uniform and blew the whistle for the very first time in September 1998. Today, I am 30 years old and I have been refereeing since I was 17. Refereeing has been an integral part of my life as I have devoted my attention and passion to it since the very beginning. My father (Ronald Farrugia, ed.) was a FIFA assistant referee and he is my role model. It was him who passed on his love for refereeing and I always trust in his advice.”

How did you prepare for the new season?

“Locally, the football season starts around mid-August and ends in May. During summer I continue to train regularly to remain fit. This year, I also had the opportunity to attend a one week training course in Bulgaria, organised by FIFA and MFA.”

How is it to be the only female referee in the national top class?

“I feel honoured to referee in the National top class but I do not wish to remain the only woman out there! I am continuously encouraging other girls to take up the whistle and we are working very hard to promote refereeing. Women have so much to offer. For some reason, many believe that you have to be a man to be a good referee. This is simply not true. Women make great referees. In fact women are better equipped to handle some aspects of the job than men are. But this does not mean that one is better than the other, only that we, women, may have different ways of doing things.”

Dagmar Damkova from Czech Republic, who I’ve interviewed for my blog too, is also the only female referee at men’s top level. She gives much less cards than male referees. How is that with you?

“I don’t feel that players change their behaviour according to the gender of the referee. Although a difference in behaviour may occur because there is a different kind of approach. For instance, I consider myself as a good verbal communicator and I use this skill to my advantage. This usually results in the players behaving well. I also have good non-verbal communication skills. When sometimes I give “The Look”, this stops any misbehaviour and respect is earned instead. This might also be the reason why I give fewer cards than other male referees.” 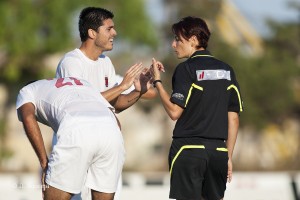 You’re now promoted to the Elite Development group. What are your goals?

“I always aim to perform to a consistently high standard and officiate at the higher profile matches. But ultimately my aim is to referee in a Women’s World Cup. This takes a lot of hard work. After refereeing a game, I get feedback from my observer and from my mentor on how to improve in the next games. I also analyze different game situations and I watch recordings of the games I officiated in order to evaluate my performance. Personally, I feel that refereeing is a continuous learning process.”

Ever thought of being a female referee at a (men’s) World Cup?

“I guess refereeing in a Women’s World Cup is just as fine.”

What is the most important thing my readers (mostly referees) should keep in mind when officiating?

“The biggest part of being a referee is being able to deal with people in a whole array of situations. Being calm and being able to manage whatever situation is presented to you effectively is crucial. One needs to visualize him/herself at key moments in the game: set a good tone for the game from the start by applying the right foul recognition – not too many, not too few; talk to players in key moments to calm them down and keep them in the game; be close to play to be accurate and convincing with your decisions, especially when it goes towards the penalty areas.”

One thought on “Ambitious referee Azzopardi from Malta goes for WC”